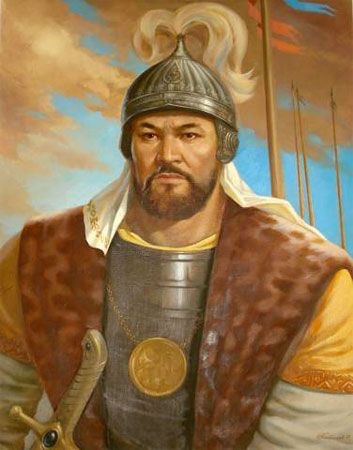 Janibek was the son of Uzbek Khan

After the death of Uzbek Khan, his eldest son Tynybek briefly ruled, who was killed by his half-brother Janibek. The full Muslim name of Janibek Khan was Jalal ad-Din Abu Muzaffar Mahmud. Under Janibek, the trend laid down by Uzbek Khan, aimed at strengthening the intellectual potential, continued. Many educated people came to the Golden Horde, at that time there was a brain drain from the Muslim world to the Ulus of Jochi. Janibek Khan (1342-1357), son of Uzbek Khan, continued the policy of his father, strengthened the central power of Khan. Janibek is known in Kazakh folklore as Az-Janibek (wise Janibek), during his reign the economy and culture flourished in the Golden Horde. Az-Janibek appears in many fairy tales, legends, epics and songs as a wise ruler of the Golden era of Kazakh nation-building. Russian Chronicles also describe Janibek as a "good Tsar", because unlike his father, there was no invasion of the territory of Russian principalities under him.

Janibek carried out his own monetary reform, which released a large number of copper coins into circulation, changed the exchange rate of silver coins in relation to copper, due to a lack of silver. On the coins, instead of the former tamgas, images of a double-headed eagle and images of flowers were printed. The foreign policy of the Golden Horde during the time of Janibek has not changed significantly. Diplomatic relations with the rulers of Egypt developed, although not as intensively as before, due to the civil wars in Egypt.

In 1343, as a result of a fight, an Italian merchant killed a Golden Horde merchant in Azov. Angry Janibek sent troops into the city, where many European citizens were robbed, and some Europeans were also killed. As a result of the conflict, European merchants lost more than half a million gold florins. Janibek banished the Italian merchants from Tana for five years. Prices for Eastern goods and grain, which came to Europe through the territory of the Golden Horde, increased. In 1343-1344, the Venetians decided whether or not to extradite the merchant responsible for the incident. In 1344, the Venetians refused to extradite their merchant-Janibek besieged Kaffa. He was unable to take the fortified city and returned again a year later to besiege it. Without taking the city, Khan decided to use "biological weapons". The body of a man who had died of bubonic plague was thrown over the fortress wall with the help of a catapult. Under siege, heat, and food shortages, a plague epidemic broke out in Kaffa. Many of the besieged fled to Venice and Genoa in fear of disease, bringing the plague there. According to some sources, in 1348-1349, the plague epidemic that began in Kaffa wiped out up to 60% of the European population. After 1345 and the siege of Kaffa, Janibek banned Italian merchants from trading on the territory of the Golden Horde, but in 1347 allowed them to trade in Azov, increasing the tax from 3 to 5 %. At this time, long civil wars continued on the territory of the Ilkhans. In 1356, a puppet khan died who was appointed by Malik Ashraf of the Sulduz family. Seizing the opportunity, Janibek in 1356 went on a campaign against Iran and Azerbaijan. He captured Malik Ashraf and conquered the city of Tabriz. He left his son Berdibek as a governer there, leaving to help him Emir of Akhijuk. While returning to his capital, Janibek fell ill. Janibek seemed to live out his last days. Toglubai of the Kangly family sent a word to Berdibek that Janibek was dying and advised that if Berdibek wanted to become Khan, he should immediately return to the capital. When Berdibek was back in Sarai al Jadid, Janibek had already began a recovery. Janbek was upset over Berdibek's quick and unauthorized return, but Taidula reassured him. Toglubai and Berdibek, concerned about Janibek's reaction (Berdibek could be punished for his arbitrary return from Tabriz), decided to act. They broke into Janibek's chambers and strangled the recovering Khan. Having come to power, Berdibek radically solved the problems of the existence of rivals and pretenders to the throne, succumbing to the persuasions of Toglubai. All of Berdibek's siblings were killed, as well as many relatives. Taidula tried to save the newborn son of Janibek, but Berdibek killed him. Ahijuk left as the Governor in Tabriz, first declared independence, but soon perished in the struggle with other Iranian rulers. Berdibek himself died in 1359. His death marked the beginning of the "Great Zamyatnya" and two decades of civil wars.